I received this message from Margaret this afternoon:  "Allen Jumper's surgery was put off until today between 10:00-10:30am. A heavy metal gate fell on him when he went to put out a salt block for his cows yesterday morning, pinning him to the frozen ground. He had his cell phone on him and called his son as the gate was too heavy for him to lift off. Thank the good Lord for cell phones!"

Rita Pringle sent this message today:  "Rachel Wallis to the prayer list. She is the 9 year old grand daughter of a co-worker. She had spinal surgery at Christmas and then ended up with a serious infection."
Posted by Molly Woodall Lamar Avenue Prayer Requests at 5:13 PM 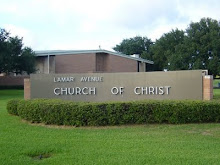